A couple of months ago, we announced Mizu, the API traffic viewer for Kubernetes.

You can read more about the original announcement here.

Not only does Mizu help you easily detect common backend application issues like bugs and performance problems—it also helps you quickly troubleshoot them, and ultimately fix them.

As part of our continual commitment to open source contribution, we are thrilled to announce the support for the following additional protocols:

Those are in addition to the existing support: 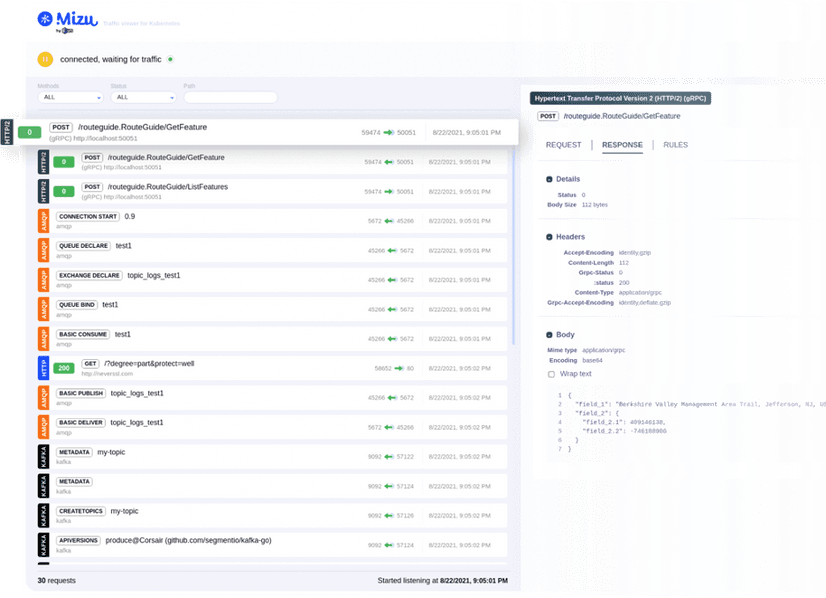 You can now use Mizu to view API traffic between microservices that are using numerous protocols to communicate.

Here’s a quick how-to guide to see the multiple protocol support in action:

If you want to follow the steps in this tutorial, you need to have a Minikube or Kubernetes cluster running.

You can clone and deploy the repo's manifests by using these commands:

To use Mizu, either download the latest mizu release directly from GitHub, or by using this command*:

To make it easy to understand the API traffic flow, Mizu assigns a different color to each protocol.

Mizu is an open source multi-protocol traffic viewer for Kuberenetes that can be used to view API traffic between microservices communicating over synchronous and message-based protocols.

Traffic viewing is essential for troubleshooting bugs, defects, and regressions. It helps developers find the root cause of a problem quicker and therefore deploy faster.

Mizu is an open source project created and maintained by UP9 and can be downloaded directly from UP9’s GitHub repository.